If you’ve ever attempted to grow microgreens you’ve probably wondered “do microgreens re-grow after cutting.

Growing microgreens is a rewarding and surprisingly easy task. After all, most microgreens are ready within 2-3 weeks, they can be grown at home in a tray, and they need very little maintenance.

In fact, once you’ve got the hang of it you can grow multiple types of microgreens in a space no bigger than your dining room table. The fact that they are delicious and nutritious is simply an added bonus!

But, microgreens and even shoots are different from sprouts; you don’t harvest the seed. This leads to the question of whether microgreens re-grow after cutting.

Harvesting microgreens simply mean cutting them above the level of the growing medium; just high enough to avoid the soil from getting onto the plants. The seed, which has already germinated is left in the soil.

It is important to be clear about the distinction between microgreens, sprouts, and shoots. All of them are miniature versions of the mature plant, but microgreens take the longest to grow. Sprouts can be ready in less than a week, while shoots should be edible in 1-2 weeks.

In addition, when you eat sprouts you eat the emerging stem and the seed, there is nothing left to re-grow.

Shoots are harvested in the same way as microgreens and do present the potential for re-growth.

The good news is that, in some cases, the microgreens will re-grow. In fact, you can get several crops from one set of seeds. Once they stop growing then you can empty the contents of your grow tray into your compost pile; it will make great material for the plants in your garden.

Of course, you’ll have to continue to look after the seeds, in the same way as you have done up into your first harvest. This means continuing to give them indirect light, maintaining a temperature of approximately 60°-70° F, and making sure they stay moist. Ideally, you should water microgreens from the side or keep a tray of water below the growing media.

The seeds do not need to be removed or go through the germination process, the shoots you have cut will simply grow back and be just as nutritious and tasty as the ones you’ve just eaten.

Top Tip: You do need to consider if this is the preferred option for you. There will need to be some shoot left, growth is usually much slower and the taste can be affected. 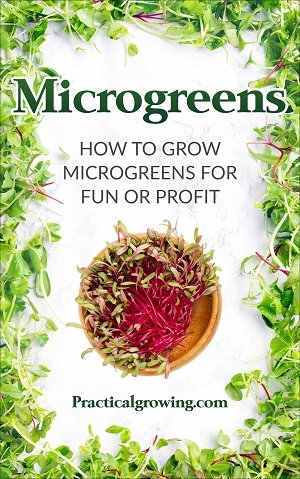 Do you want to grow microgreens at home?

Get my bestselling book about growing microgreens on Amazon.com!

Which Microgreens Should You Re-Grow?

Having said that, some microgreens are naturally better at re-growing than others. This is especially true if they are in larger pots as they will have a stronger root structure.

Don’t forget the plants are very young when you take your first harvest, some may not survive the shock of losing all their growth so quickly.

Green peas, speckled peas, snow peas, snap peas, and even fava beans are very good at re-growing. Some salad greens can also be successfully re-grown; providing there is at least an inch of stem left when you cut them.

You’ll need to decide if it’s worth the effort in order to answer yes to “do microgreens re-grow after cutting”; you may find it’s easier and more effective to simply plant a new batch of seeds.

2 thoughts on “Do Microgreens Regrow After Cutting?”